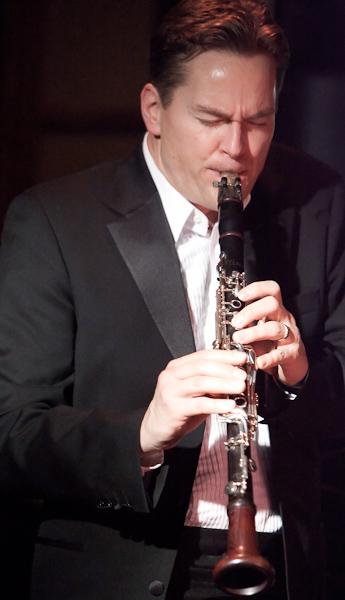 Kitchener, Ontario native Scott Poll grew up listening to his father's big band records, and he was fascinated by the thrilling sounds of jazz clarinet.  He picked up the intstrument at age 12, and as a music performance major at Wilfrid Laurier University in the late 1980’s, he studied with classical clarinetists Victor Sawa and Gary Kidd, and later with Canadian jazz icon and Order of Canada recipient Phil Nimmons.

In 1990, Scott joined the Canadian Forces Central Band in Ottawa, and has since been showcased as a featured clarinet soloist performing swing classics in numerous concerts throughout Canada, Europe and the U.S.A.  Scott Poll formed his first “Pollcat” jazz combo in 1993 while living and freelancing in Calgary Alberta, and after moving to Ottawa a year later, the group has been a fixture on the Ottawa music scene ever since.

With a specialty in small group classic swing jazz from the 1930’s and 40’s, clarinetist Scott Poll and the “Pollcats” have always aspired to recreate the popular musical sounds from this bygone era.  Much of their repertoire of jazz standards are original arrangements and are drawn from the songbooks of the “Golden Age” of American music.

Over the years,  Scott has had the privilege of working and performing with jazz piano legend Gene di Novi, vibist Peter Appleyard, and guitar great Jeff Healey.  In 2003, he was invited to be a guest performer at the Birdland Jazz Club in Tokyo, Japan with a swing ensemble led by bassist Takao Neichi and trumpeter Akio Mitsui.  In December 2005, Scott was invited to be a featured soloist in Bangkok, Thailand at a Royal Command Performance for the 50th birthday celebration of Princess Sirindhorn.  In this performance, he was featured playing music written by the King of Thailand himself.  Scott continues to look forward to future collaborations and musical adventures.
Proudly powered by Weebly